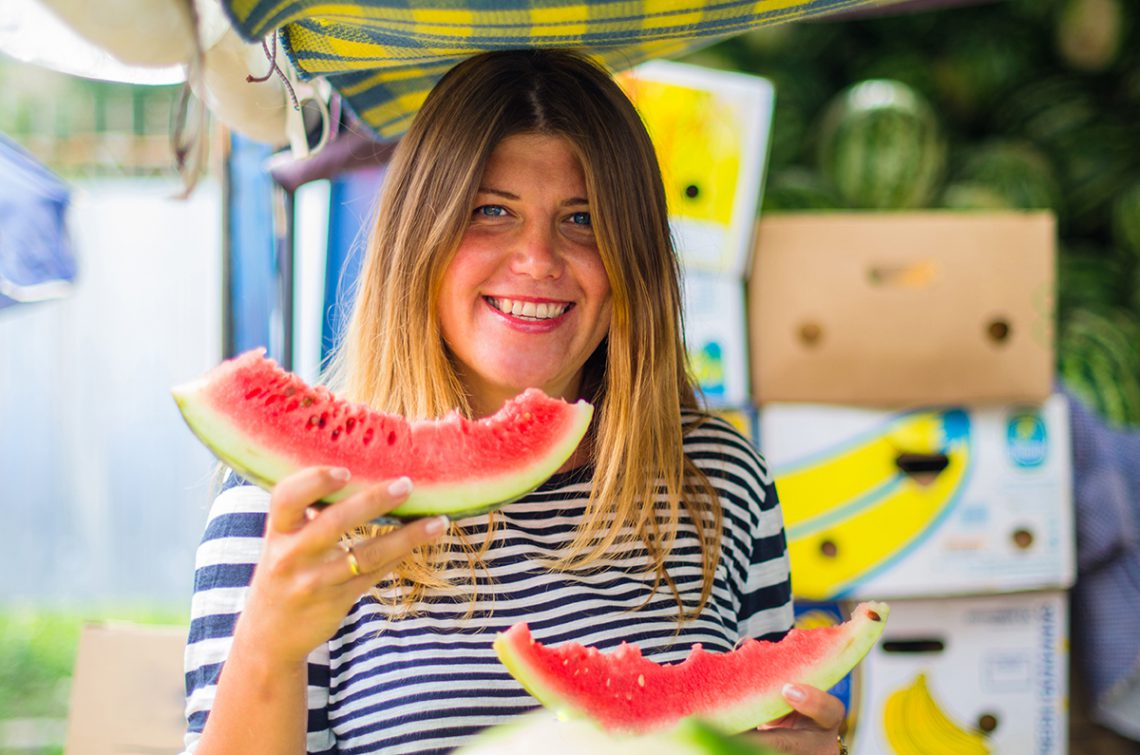 It’s only logical. They built Kherson near Odessa and do you know why? Nobody knows how to choose and eat watermelons better than in Odessa. Now it is a bit easier than in the past, but do you know what kind of watermelons did we have back then? They were small, with bright red flesh on the inside and dark green smooth skin, covered with bluish mist patina on the outside. In Odessa, we affectionally called this kind of watermelon “tumanchik”(mist – because of the skin) or “ogonek” (pilot light – because of the flesh). To the English-speaking world, they are known as Sugar Babies. Its size was just enough to satisfy everybody’s sweet tooth at the end of family dinner, but not too big that it can’t be finished in one sitting, it also won’t make you run down the hall all night. Nowadays, those striped monsters of watermelon that conquered the markets, make you suffer for your gourmet pleasures. Unless you are a decent weightlifter athlete, you will work up quite a sweat while you choose your watermelon, carry it home under the Odessa’s sun, lift it up to put it in the bathtub so it can cool off in cold water, cut it (and it might roll off the table) and eat it. To leave an unfinished watermelon is a greater sin than even the cardinal sin of gluttony, no other choice but eat up even if you are about to burst. When there is a will there is a way!

Let’s start with selection of the giant fruit. The rule of thumb is almost the same as with choosing a puppy on the Starokonka (an outdoors market kind of our country fair happening every weekend in the city). It should have a dry tail and ace the percussion test. Complying with these two conditions will yield a good watermelon 9 out of 10 times. There is one more teeny-tiny thing that is of extreme importance. It sounds like this: “pick a female watermelon (kavunychka) for me, please “. Upon hearing these magic words, the drenched market vendor, sporting an airfield-sized coppola cap, will crawl into the back of his truck with Kherson license plate, and will dig out a comparatively smaller-sized watermelon, with a bit wider navel, a spot where there used to be a flower, than the rest of watermelons. It is known fact, a female watermelon has a dry, grey, size of a quarter navel on the opposite to the dry watermelon stem side. Bingo! Perfect choice.

Next step is to get this striped monstrosity (or even two) to your city dwelling without a car.  How? Not in the slightest! But once home, you must cool it in the bathtub, otherwise anhedonia will rear its ugly head to scare away the pleasure of devouring the watermelon. And no, there is no way to fit it in the apartment size fridge already full of other Odessa delicacies. And finally, a couple words about how to eat a watermelon. There are two methods. One is called – when watermelon is an after-dinner dessert. The second – when watermelon IS a dinner.

The former… Right after a hearty Odessa dinner, a lucky someone places a watermelon in a bowl, takes a knife and stats slicing a watermelon into the manageable slices, 5 centimetres wide, right in the said bowl. If there is an Odessa babushka (grandma) present, she would surely take the first slice and de-seed it with the tip of the knife, god forbid that precious grandchild would choke and get smacked on the back, in lieu of a Heimlich manoeuvre. Then, she would peel the watermelon piece and slice it, so that royal kid could eat it with a fork (Right into the mouth, sweetie!). Babushka will save these peels for a delicious jam she makes, but that would be later. And now, all family members are eating the watermelon in a rare moment of silence, while putting a “fix the door latch in the toilet room” on their to-do list.

The latter… After you placed a watermelon in the bathtub to cool, head to the store to buy some bread. One should pick a plain, yeast, no seeds, no grains, no nothing loaf of crusty bread, preferably still hot. Take it home. When home, locate a watermelon and two bowls. Cut the watermelon in half and place each half in separate bowl. Pick a bowl with the half that appeals to you more. Take a tablespoon and a bread. Sit somewhere comfortable in a Turkish pose. Tear yourself a heel piece of bread, a warm heel. You should tear it off by putting your fingers deep into the loaf, so you can grab not only the crust but the squishy part as well. Bite into the bread. Drive the spoon (a tablespoon! This is important!) in the very heart of the watermelon, in that sweetest centre where the seeds are never found. Try to dig up a piece of watermelon and carefully shove it into your mouth (already got a little sloppy, no worries, your shirt is hungry too). Continue in a sequence: a bite of bread – a spoon of watermelon, bread – watermelon… When you eat your entire half of the watermelon flesh, you will find some remaining juice splashing on the bottom. You have an endurance, strength and will left, you will mop up this juice with that bread crumb and finish eating. Keep moping and eating until the bottom is dry. No ifs, ands or buts! Or else… 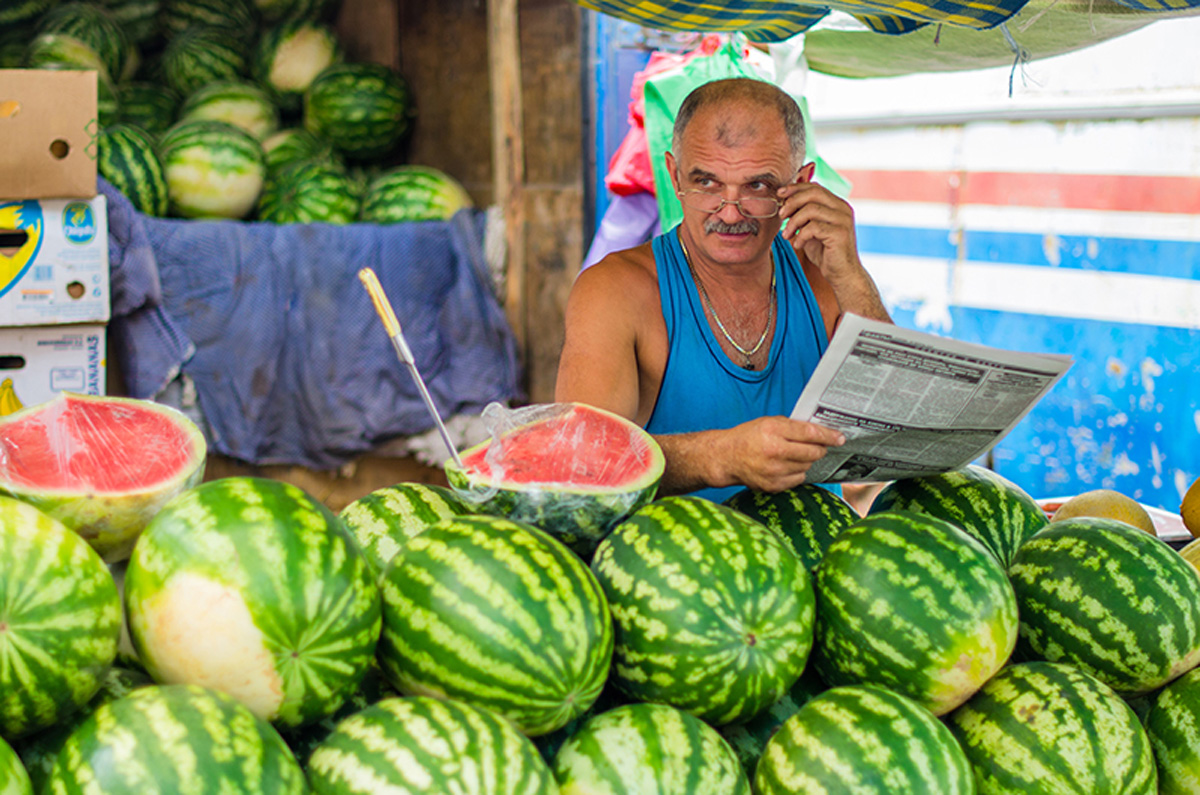 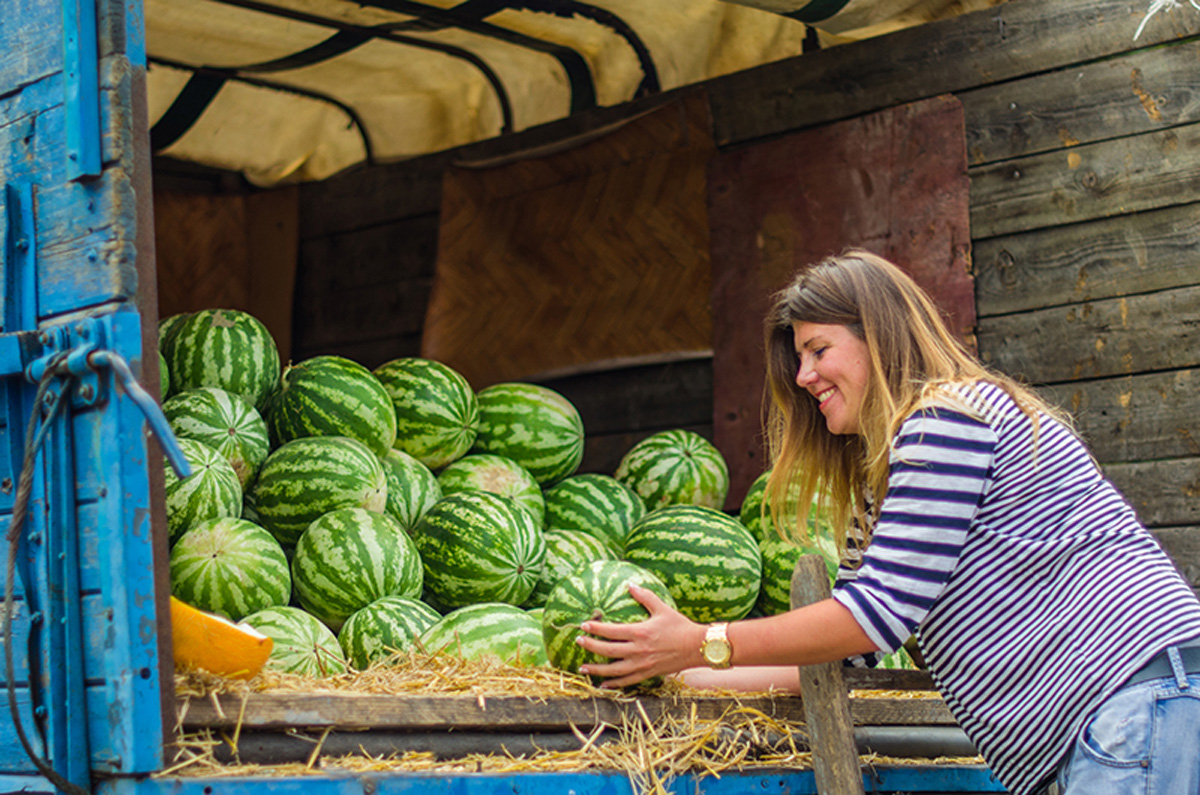